The late works of Siegfried Markowitz are best represented by his poem Sentence recently published in the B O D Y Magazine. The melancholy fills the space while the poem is read. For us, it worked better than any client specification. 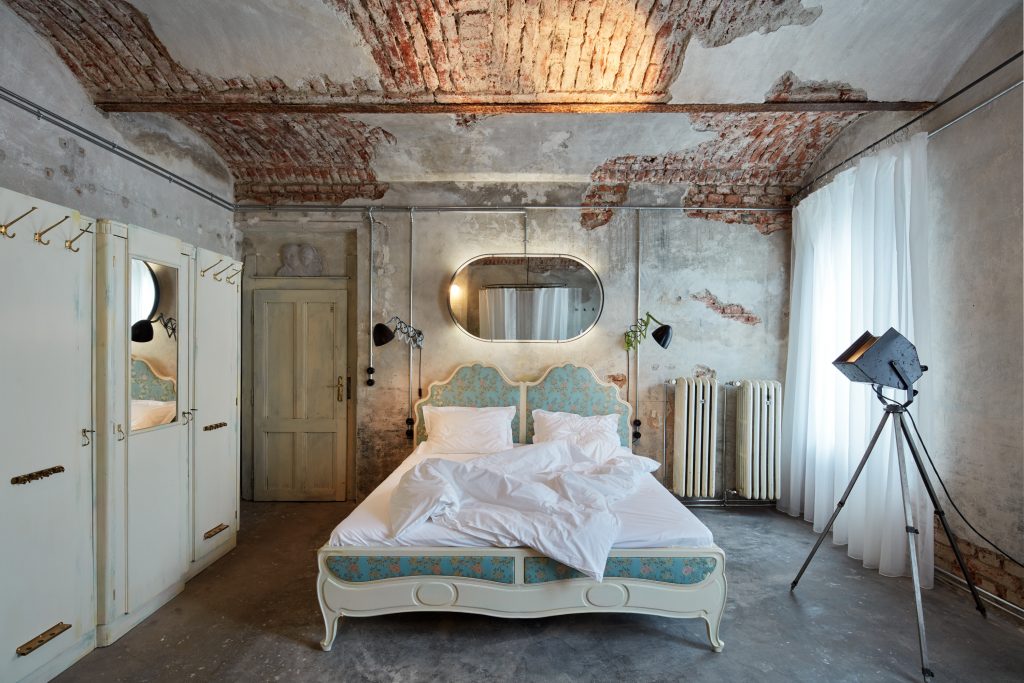 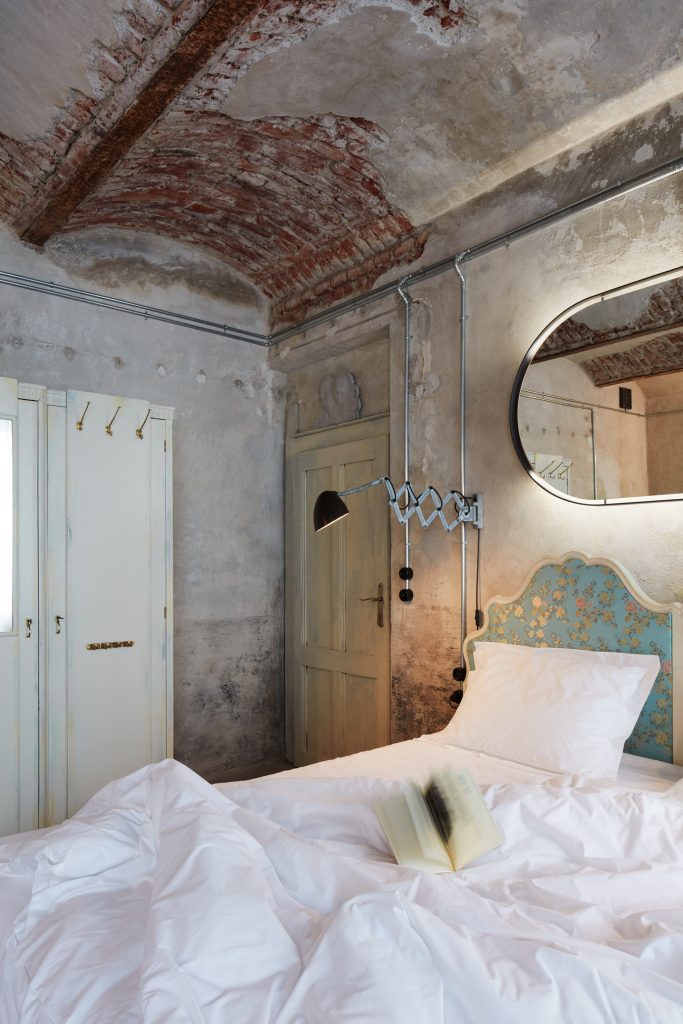 Our task was clear at first sight, we needed to keep the soul of the space while building a retreat for the creative mind. The disused laundry at the top of a 19th-century Mestansky dum had it all. In the very heart of the Prague’s Jewish quarters, hidden in the attic, five stories above the havoc of the Old Town. In the very center, though touching the sky. Years of labor soaked up in the walls created the perfect foundation for our design of a poets study. 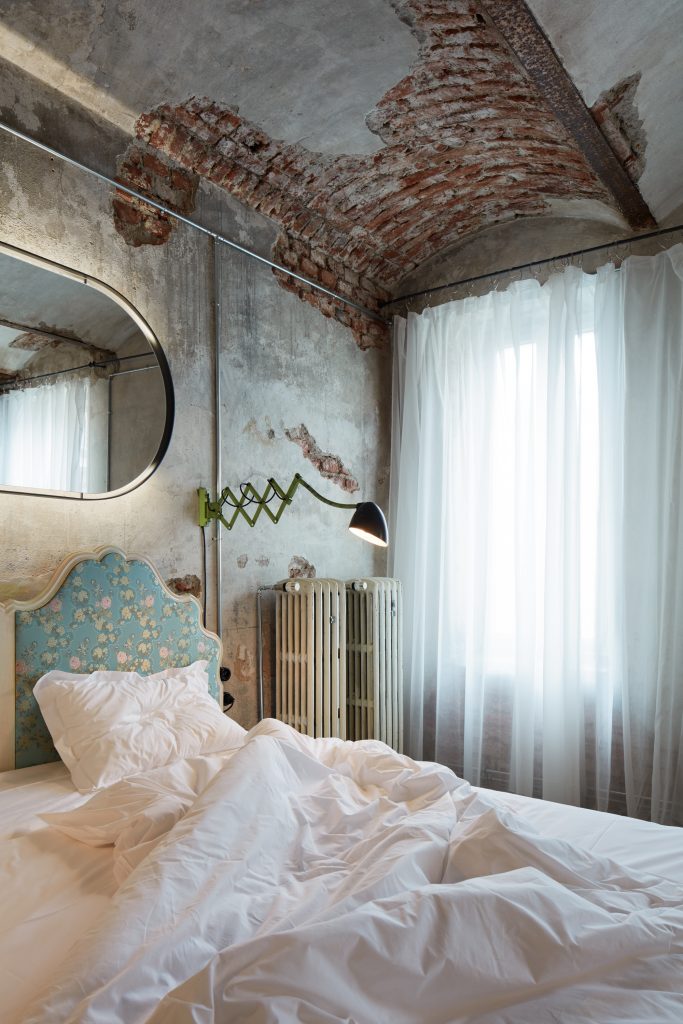 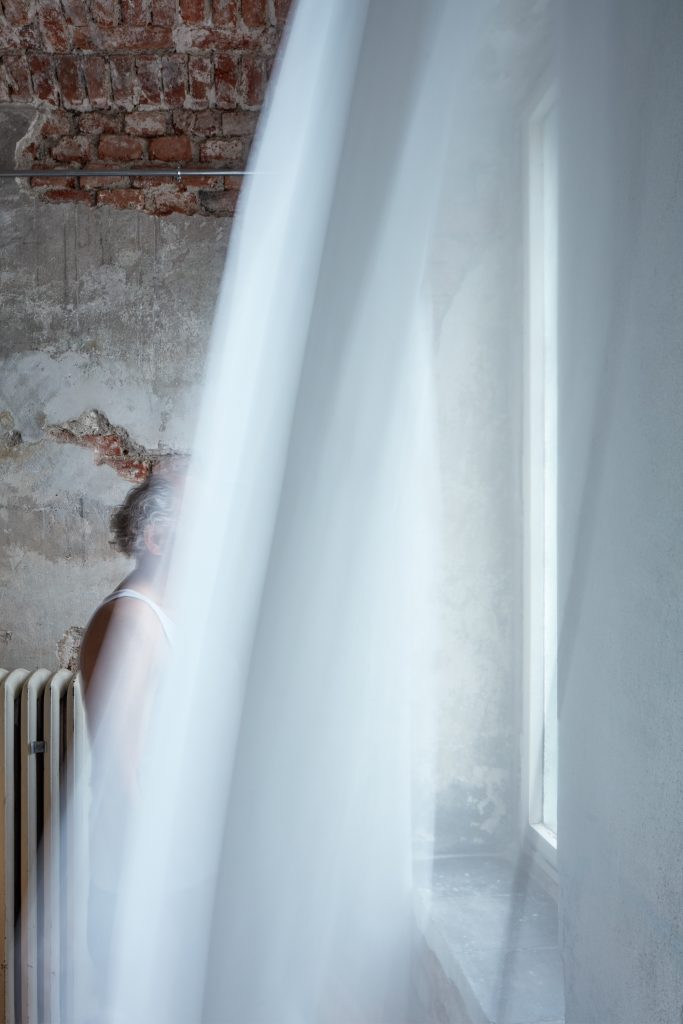 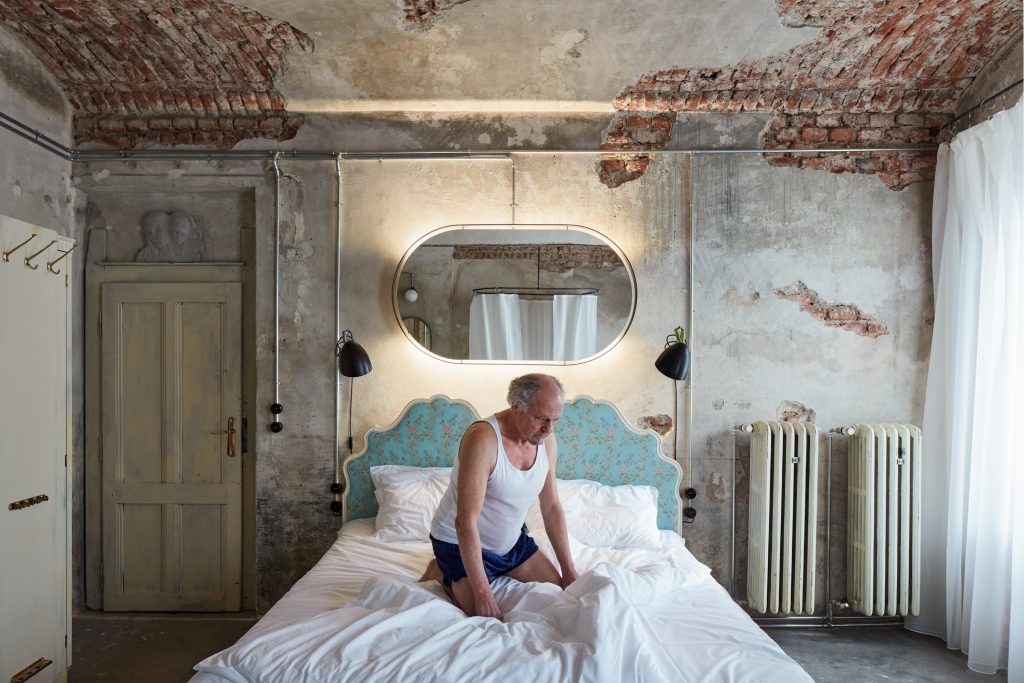 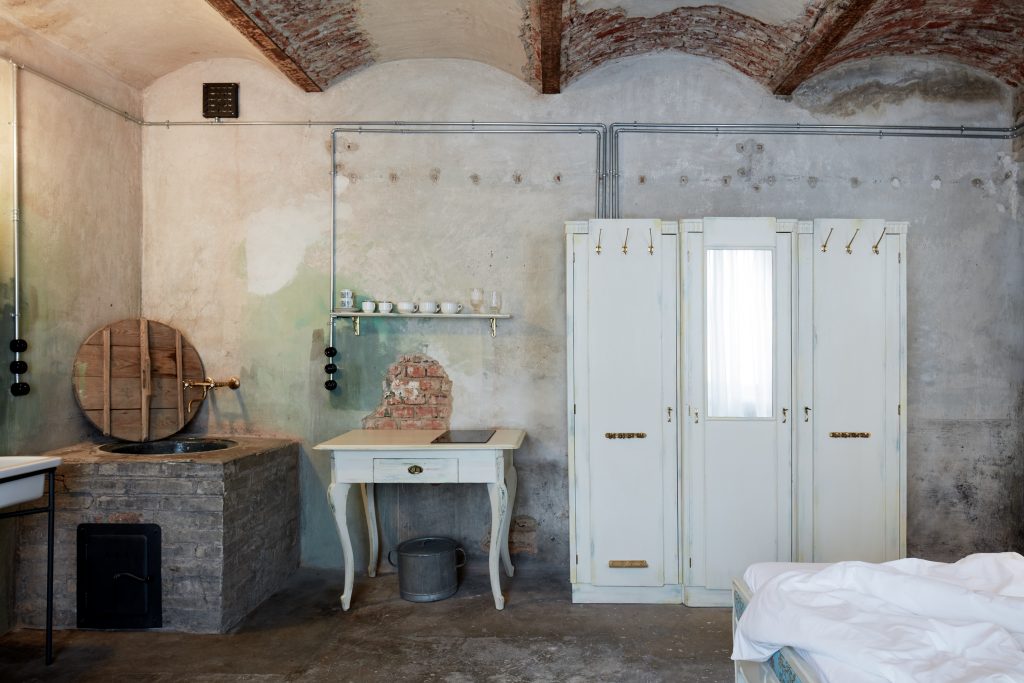 The conversion is a part of the regeneration project The Emerald by Urbanium Concept. Each of the apartments in the house is designed to a different mood. Its general idea is creating comfortable living spaces while retaining the existing historical qualities. All our interventions had to follow the objective of amplifying the unique atmosphere and enabling comfortable writing and occasional sleep-over. 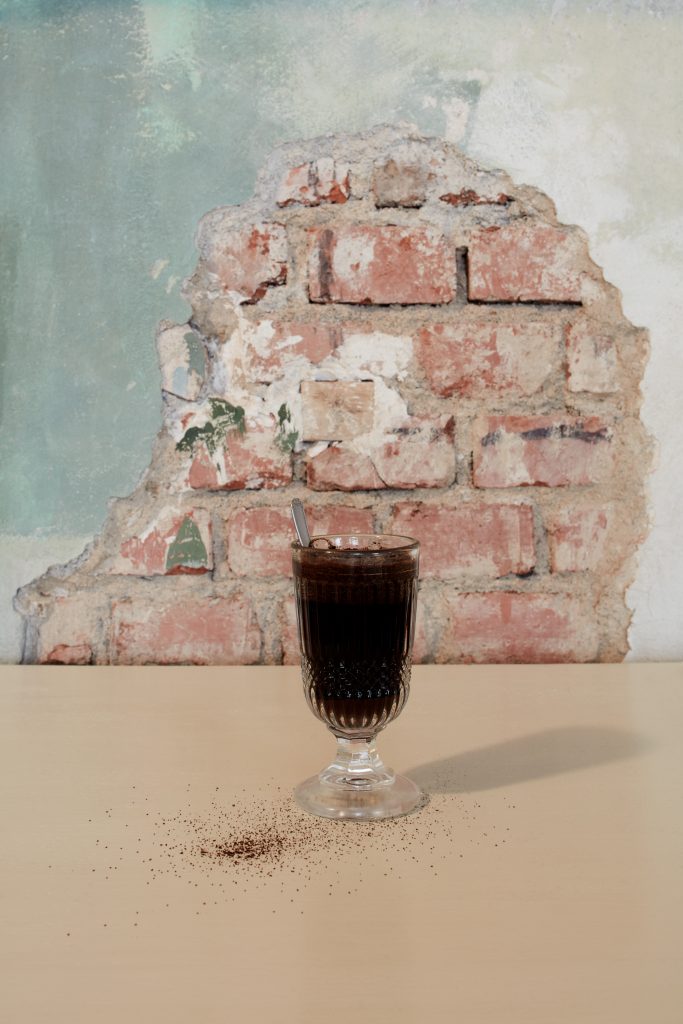 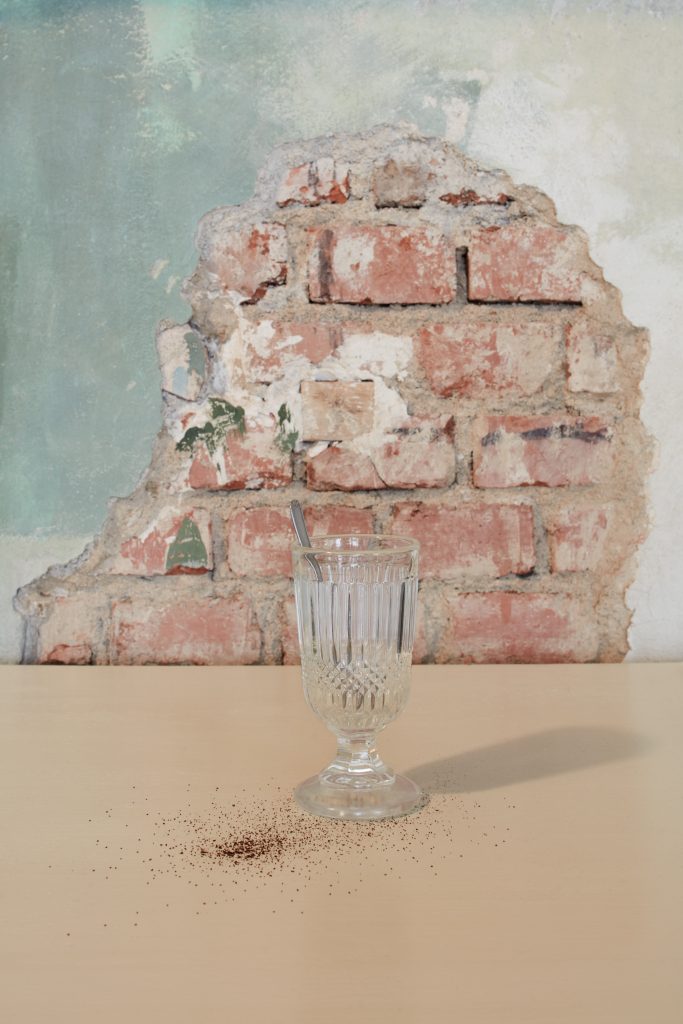 The bed occupies the center of the flat. It divides the 31 square meters into distinct parts – hall, kitchen, wardrobe, bathroom, dining area and finally the working table. All piping is on the surface; former washing stove turned into a sink. Furniture from the attic got a new coating; the wardrobe had to be cut apart to pass through the door. New electric hob is fitted into an antique table, and two ornate beds converted into one larger, upholstered with BROKAT. 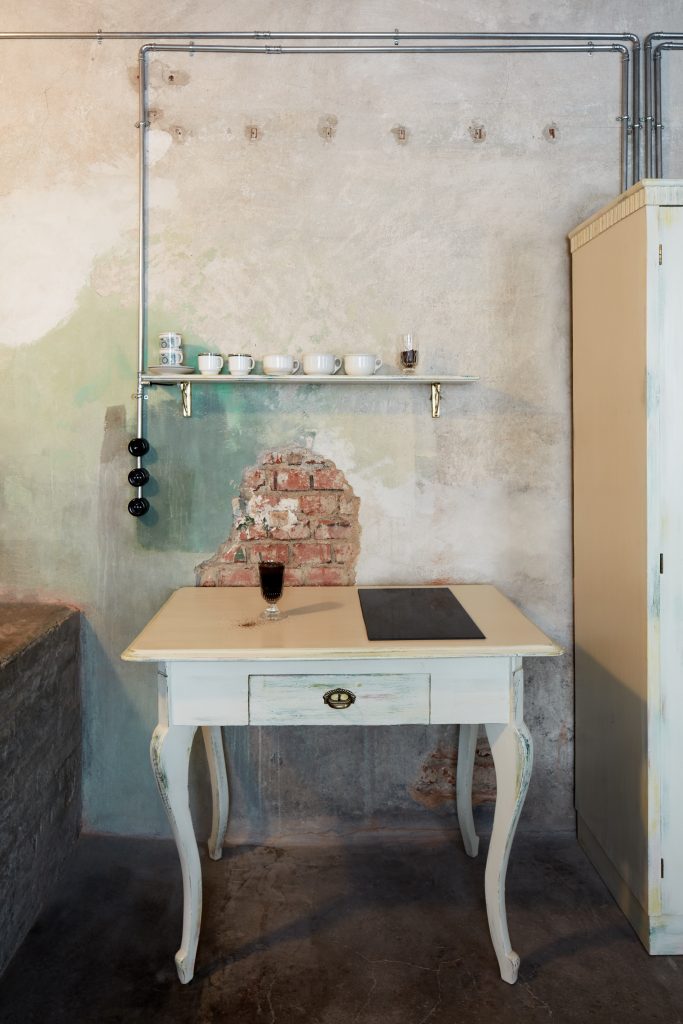 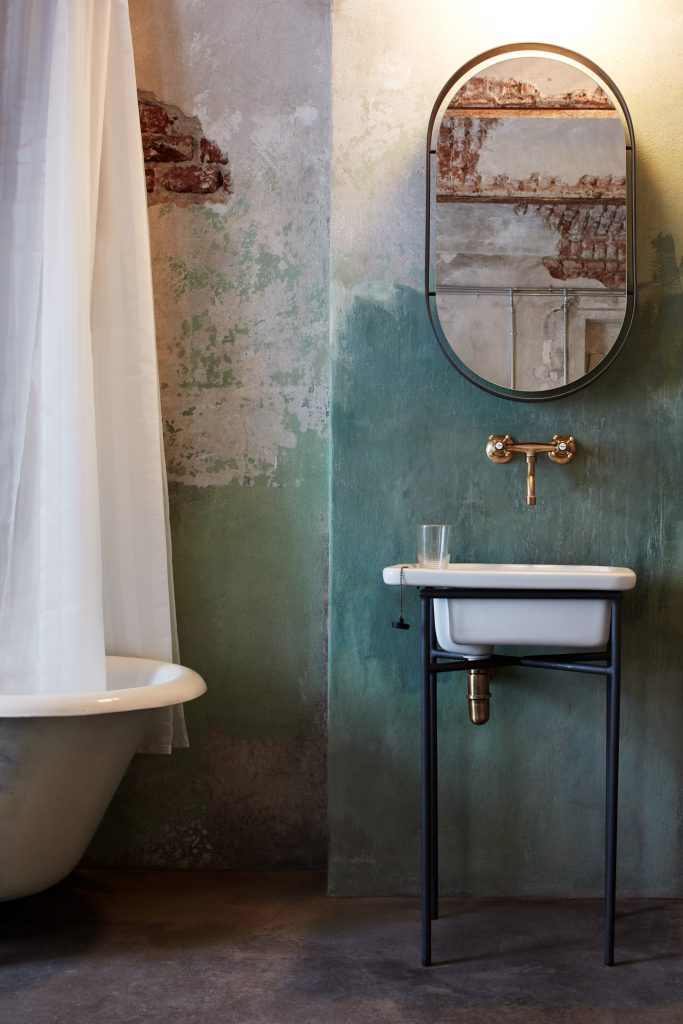 We brought ornamental softness to the utilitarian space. All that is in the daily use is clean, the rest in the background remained in the original state. 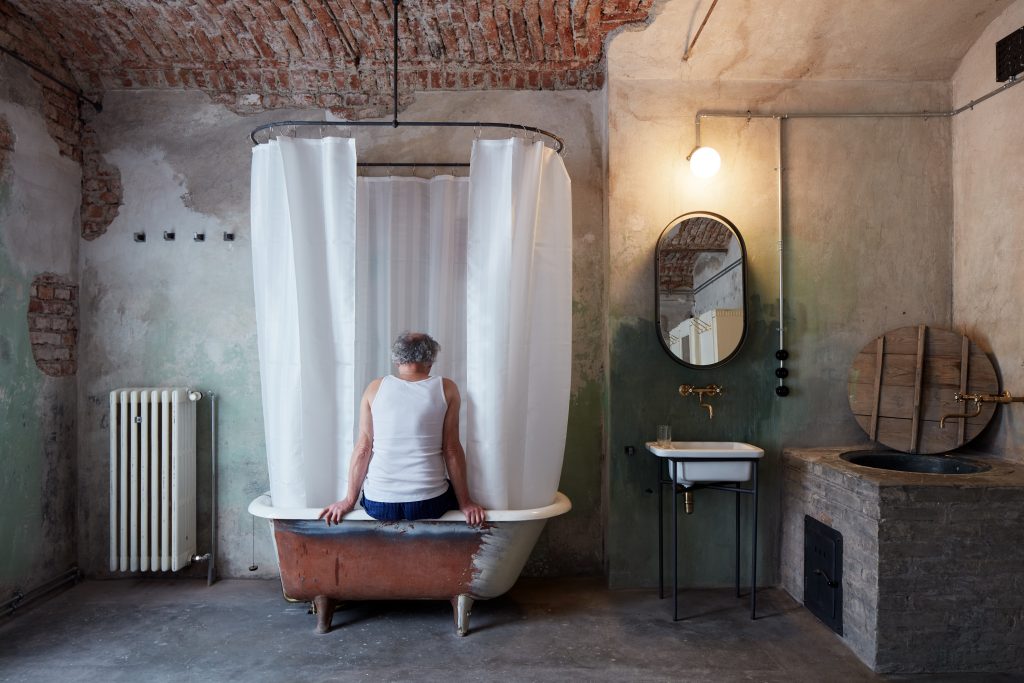 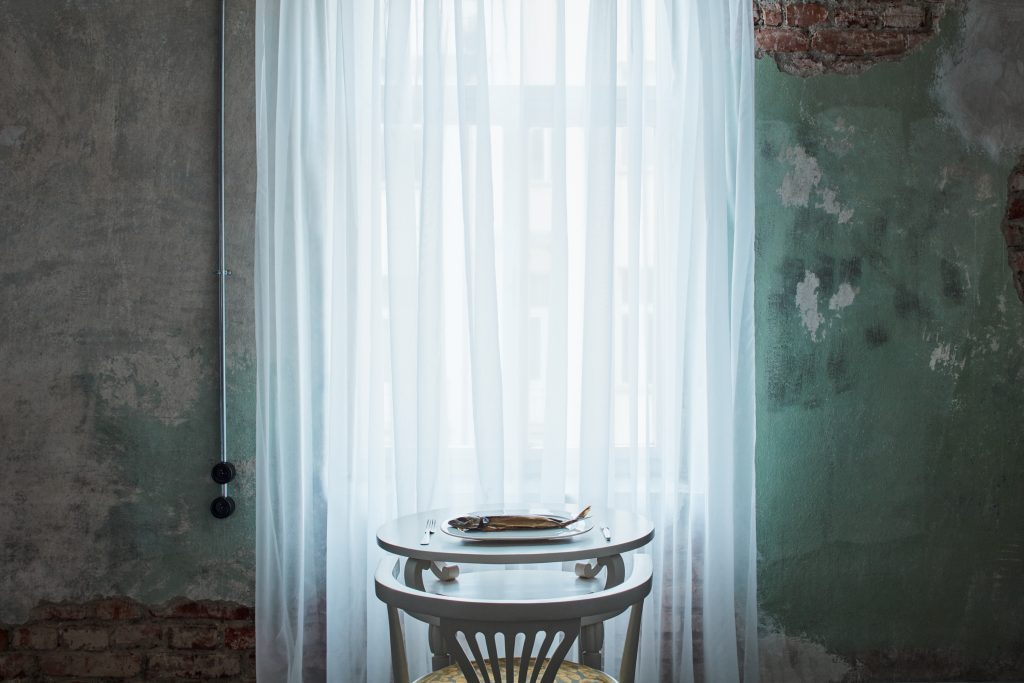 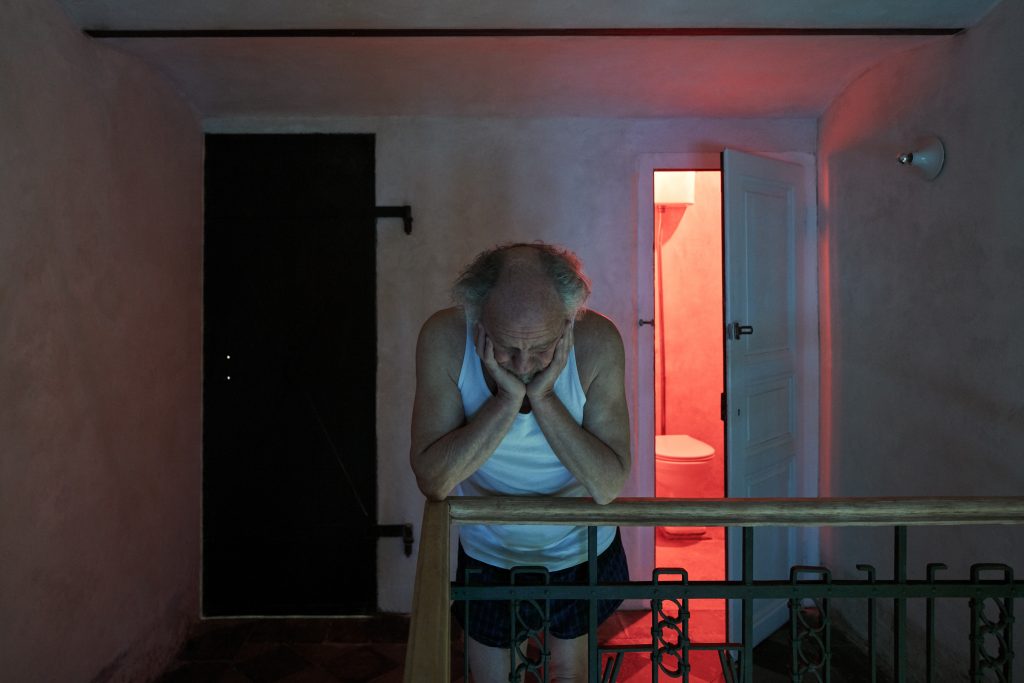 The cleaning routine remained present as the bathtub is placed in the focal point of the space. While contemplating in the bath, you see the sky and in winter the frost flowers growing on the single glazed windows. 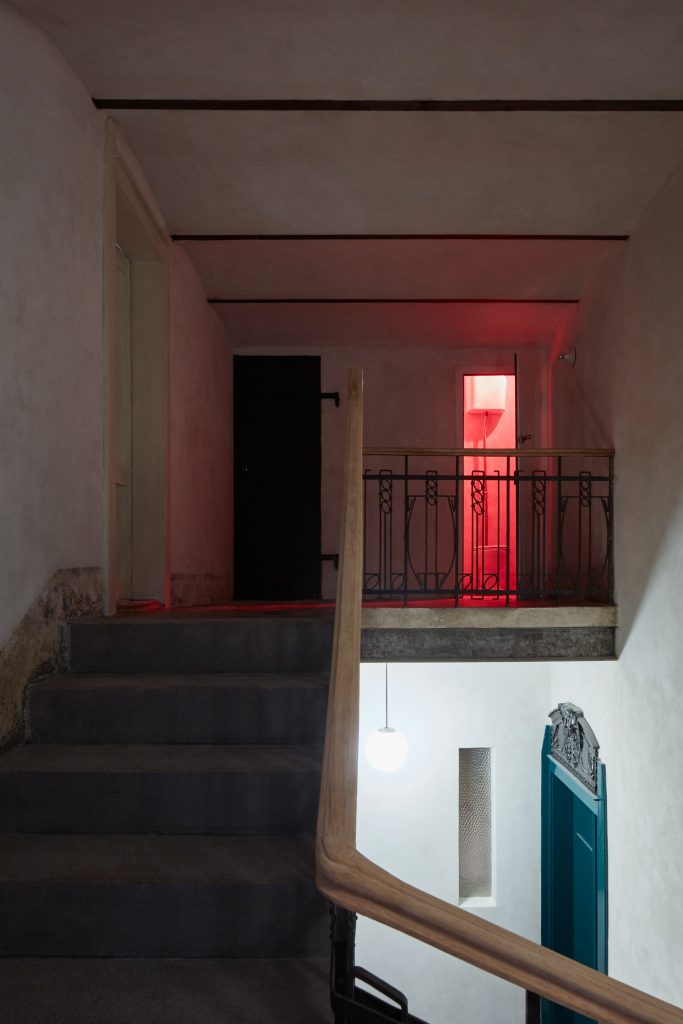 sometimes at night, just before I turn off the lights

and shut myself into the night, before I have read

that magazine piece about an eccentric artist

working on an exact replica of the entire world

or googled the symptoms of some rare fatal disease,

just to be sure I am still immortal,

before I have checked on the whereabouts

of the cat, to see if he has climbed

into that small nook under the sink

when the trash bin was open

or has not been locked out on the balcony,

but after I have smoked my last cigarette and

emptied the last bottle of wine and

made a mental note to buy more wine soon,

after I have checked on my sleeping son, to make sure

he is still breathing, though he always is,

after I have locked the front door,

after I have taken out my false teeth

and brushed the real ones,

after I have contemplated my half-toothless grin in the mirror

and compared it, favorably, to a baboon’s butt,

after I have examined the night for stars and found none,

just a sheet of ammoniac light plastered against the sky

by the gaseous metropolis in which I now live,

and after I have asked myself again

if it would not be better to live somewhere else,

after I have decided not to think about tomorrow

because there is always a tomorrow

and after I remembered, for no reason at all,

that night we parked my old Rambler in a field

of wildflowers not far from where you now live

and a storm erupted that seized us in its violent fist,

and we clung to each other for dear life

as all lovers do –

o Christ, all the years that have passed

since the days we spent inside each other’s skin

in a single night’s dream.